90ft sculpture of the bacteria E.coli goes on show at the National Museum of Scotland

A 90ft long inflatable sculpture by Bristol-based Luke Jerram has been suspended from the ceiling of the National Museum of Scotland’s Grand Gallery. The E.coli, which is 5 million times bigger than the real bacteria, is on display in Scotland for the first time.

Bacteria were the earliest form of life on our planet, and so this artwork could be considered as a curious portrait of our distant ancestors. If there is life on other planets (or moons) in our solar system, it may well look like this. This artwork was also made to reflect upon the importance of bacteria in our lives. Although some forms of Escherichia coli (or E. coli) bacteria can cause illness and even death in humans, the use of the bacteria is vital in medical research.

Luke Jerram’s E.coli is part of the 18th edition of Edinburgh Art Festival which runs from 28 July – 28 August 2022 at venues across the city, as are the exhibitions Anatomy: A Matter of Life and Death and Japanese Contemporary Design, both of which are also on at the National Museum of Scotland during the Festival.

“Making visible the microscopic world around us, the artwork was made as an experimental object to contemplate. When standing next to it, does the bacteria alter our personal sense of scale? Does it look scary, beautiful, comical or alien? Will audiences be attracted or repelled by it?”

“We’re delighted to be bringing this spectacular creation to Scotland for the first time. It’s great to have it on display during the festival period and particularly as part of the Edinburgh Art Festival.”

This giant inflatable E.coli sculpture was made for the KREBS Fest, presented at University of Sheffield. The artwork was first displayed for a month in the Winter Gardens in and then in Firth Hall, Sheffield. The artwork has since been presented in other venues around the UK including the Eden Project. It has been brought to Edinburgh with the support of the University of Sheffield and the and UKRI strategic priority fund "Building collaboration at the physics of life interface".

3. Visit edinburghartfestival.com to view the whole programme of events and exhibitions.

4. Luke Jerram’s multidisciplinary practice involves the creation of sculptures, installations and live arts projects. Living in Bristol, but working internationally since 1997, Jerram has created a number of extraordinary art projects which have excited and inspired people around the world.

In Edinburgh he hung his giant 7m diameter sculpture of the Moon in St.Giles Cathedral 2019, and he also has a sculpture of the Earth called GAIA currently on permanent display in Dynamic Earth.  www.lukejerram.com 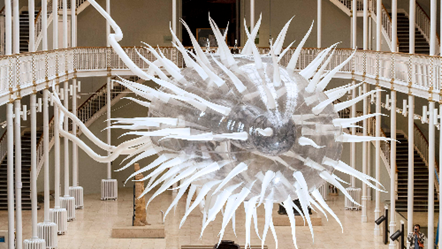