A new exhibition at the National Museum of Scotland explores the life and career of one of the 20th century’s leading forces in Modernist design, in the centenary year of his birth. Bernat Klein: Design in Colour celebrates the work of the Serbian-born textile designer Bernat Klein (1922 - 2014) who settled in the Scottish Borders after the Second World War.

The exhibition examines his creative process and varied career; from supplying innovative couture fabrics to some of Europe’s top fashion houses to his strong influence on architecture and interior design in the UK and Scandinavia.

Opening on 5 November, it marks the centenary of Klein’s birth and is part of a series of cultural events developed by the Bernat Klein Foundation to celebrate the designer in 2022. It charts his 60-year career as a textile designer, artist, educator, and colour consultant.

National Museums Scotland acquired his archive in 2010. This internationally significant collection of around 4,000 objects ranges from fabrics and garments to design development material.

Highlights from the collection are on display in the exhibition - including couture fashion, interior designs, textiles and original artworks - alongside newly acquired pieces which contextualise Klein’s work and recognise his legacy. Made possible with Art Fund support through the New Collecting Awards, these acquisitions include creations by fellow textile designers Ascher Ltd and Tibor Reich.

Bernat Klein was born in Yugoslavia (now Serbia) in 1922, to an Orthodox Jewish family who ran a wholesale textile business. He attended the Bezalel School of Art & Craft in Jerusalem in the 1940s, where his exposure to Bauhaus ideas and the modernist architecture of Israel had a profound influence on him.

He escaped the rise of Naziism across Europe, going on to study textile technology at Leeds University before settling in the historic textile centre of Galashiels in the Scottish Borders, establishing his design and manufacturing business, Colourcraft in 1952.

Part of a new wave of designers re-invigorating British industry and contributing to economic regeneration in the post-war period, he is best known for his highly original fashion textiles, with their rich textures and exuberant colour palette.  A significant career breakthrough came when Coco Chanel selected one of his mohair tweed fabrics for her spring/summer 1963 collection.

His couture cloths quickly came to dominate international catwalks throughout the 1960s, with designers such as Balenciaga, Dior, Yves Saint Laurent and Hardy Amies all featuring his work. The company established offices in London and Paris and sold fabrics to the American womenswear market. Klein also designed ready-to-wear fashion and textiles for home dressmakers.

He had a lifelong passion for colour and worked as a colour consultant and industrial designer for various national and international firms. In 1966 he set up a design consultancy company, collaborating with progressive interior firms in Britain and Scandinavia. He was an accomplished painter and found inspiration in the landscape surrounding his Borders home, High Sunderland. Klein commissioned the architect Peter Womersley to design the building, which is recognised today as one of Scotland’s finest modernist homes.

“Bernat Klein was a key figure in Modernist design, and one of the 20th century’s most celebrated textile designers. His archive is remarkably broad and rich, and this stylish exhibition will display some of its highlights, examining his exceptional contribution to the design world and his ongoing legacy and influence. The Scottish Borders were his home and inspiration for six decades, and the exhibition will also explore the story of the relationship between his work, the landscape and the local textile industry.” 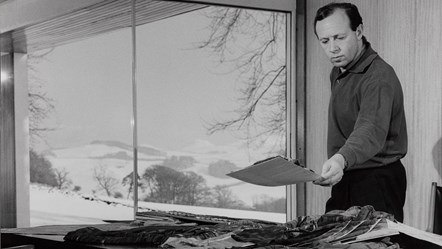 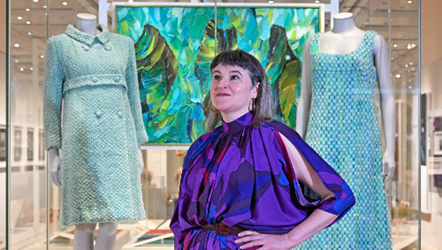