Doctor Who Worlds of Wonder opens this weekend

The Scottish premiere of the exhibition Doctor Who Worlds of Wonder opens at the National Museum of Scotland in Edinburgh this weekend. In celebration of the television show’s Scottish connections, a suit worn by David Tennant to play the Fourteenth Doctor in special episodes airing next year, will also go on display in the museum.

This ground-breaking new exhibition, which runs from 9 December 2022 to 1 May 2023, explores the science behind the global hit television series Doctor Who and gives fans a chance to experience the Doctor’s adventures from a scientific perspective.

Produced by leading experiential design experts Sarner International under license from BBC Studios, the exhibition invites fans of all ages to explore the role science has played in the world’s longest running action-adventure show. The eight zones set within this educational exhibition cover a diverse selection of exciting scientific topics while drawing in content from across the full canon of Doctor Who.

Doctor Who Worlds of Wonder offers a thrilling exploration of science for both established fans of the TV show and newcomers alike. Actor, director and author Mark Gatiss - writer of several episodes of Doctor Who - narrates the exhibition, guiding this journey through space and time.

“So many people who have gone on to work in science have had their interest piqued by watching Doctor Who, and one of the amazing things about the show is its ability to make us wonder. I’m thrilled to be part of the exhibition and I do hope as many curiously minded people as possible take the opportunity to visit at the National Museum of Scotland.”

A range of hands-on immersive experiences and interactive features take visitors on a journey through Cosmic Curiosities, a TARDIS Tech room and the science behind time travel asking whether it really is possible. In the Monster Vault, visitors also come face to face with the Doctor’s most famous foes including Cybermen, Weeping Angels and Daleks.

“We are tremendously excited that the premier of this exhibition opens at the National Museum of Scotland this weekend. From the wonder of the science fiction of the TV show to our present-day understanding of the big scientific topics it touches on, there is something for everyone.”

Doctor Who has strong Scottish connections. To date three Scots have played the role of The Doctor, Sylvester McCoy, David Tennant and Peter Capaldi (the Seventh, Tenth and Fourteenth, and Twelfth Doctors respectively) with a fourth, Ncuti Gatwa, recently announced as the new Doctor.  A suit worn by David Tenant in a series of special episodes airing next year will be displayed alongside companion Catherine Tate’s costume by the entrance to the exhibition. Other notable Scottish cast members have included Companions Karen Gillan and Neve McIntosh as well as Michelle Gomez as Missy (The Master), with Alan Cumming having also appeared recently as King James VI & I. Another Scot, Steven Moffat, was showrunner from 2008 to 2017.

The show has featured several other Scottish icons. The Loch Ness Monster appears in 1975’s Terror of the Zygons with Tom Baker, while the Picts featured along with the 9th Legion of the Roman army in 2017’s The Eaters of Light (which starred Peter Capaldi and Michelle Gomez). Other episodes set in Scotland include 2006’s Tooth and Claw, set in the Highlands and Under the Lake/Before the Flood (2015), set in Caithness.

The National Museum of Scotland is supported by players of People’s Postcode Lottery in mounting the exhibition.

The exhibition is proving to be hotly anticipated with tickets for the opening weekend already sold out.  Pre-booking is recommended, tickets are available from www.nms.ac.uk/doctorwho

Discounts available for groups of 10 or more

*10% off when you buy up to three Child 5–15 ticket alongside up to any two Adult, Over 60s, Student, Unemployed, Disabled, Young Scot tickets, with a maximum of five tickets in total. Cannot be used in conjunction with National Museums Scotland Member tickets or any other discount or promotional offer.

Further information on exhibition and images from: Bruce Blacklaw, Press Office on 0131 247 4165 or email b.blacklaw@nms.ac.uk. 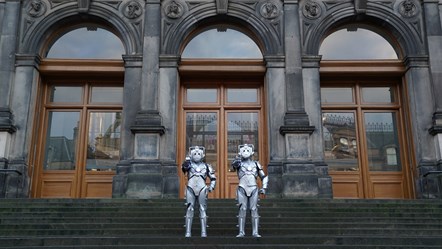 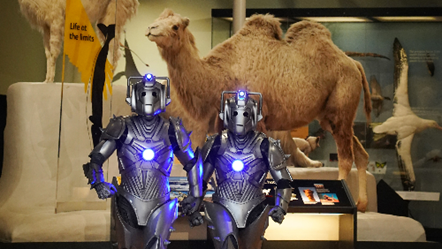