One of the most important UK archaeological finds of the century, The Galloway Hoard, will go on display from Saturday 29 May at the National Museum of Scotland in Edinburgh.

The new exhibition, Galloway Hoard: Viking-age Treasure, offers the first chance to see details hidden by the dirt and corrosion of over a thousand years, revealed by expert conservation, painstaking cleaning and cutting-edge research.

A major revelation is remarkable new detail of the unique lidded vessel which contained the Galloway Hoard’s most precious treasures. The vessel itself is wrapped in textiles which both cover the object and make it too fragile to display. However, new 3D models, taken from X-ray imaging done at the British Museum and produced with the help of the Glasgow School of Art and Steven Dey of Thinksee3D Ltd has enabled researchers to see beneath the textiles for a privileged glimpse of the decorated surface of the vessel.

The modelling, alongside dating analysis of the textiles, has revealed surprising new details about its age and origin.

“This is only the third silver-gilt and decorated vessel to be found as part of a Viking-age hoard in the UK, and so we might have expected it to be like the other two. However, the 3D-model reveals that the vessel is not from the Carolingian (Holy Roman) Empire of continental Europe as we’d expected based on other similar examples. Instead, the decoration and design show leopards, tigers and Zoroastrian religious symbols, all of which suggest that it is a piece of Central Asian metalwork from halfway round the known world.

“Another surprise comes from radiocarbon dating of wool wrapping the vessel, which dates to AD 680-780. So, the vessel is from beyond Europe, potentially thousands of miles away, and the wool wrapping it pre-dates the Viking Age, being more than 100 or maybe even 200 years old by the time it was buried. While the real vessel is still wrapped up in 1300 year-old cloth being kept safely in controlled environmental stores for preservation and future research, it’s wonderful to be able to use 21st century technology in the exhibition to let people see what it looks like under those fragile textile wrappings.”

“A unique combination of familiar objects, exotic materials and exceptional preservation makes the Galloway Hoard a fascinating find. Conservation work is allowing us to see these objects clearly for the first time, and our research so far is pointing to a new understanding of Scotland in the international context of the earliest Viking Age. This exhibition offers a rare ‘snapshot’, the chance to see real archaeological work in progress, both what we have learned so far and the work still to be done.”

“The Galloway Hoard rightly drew international attention both on its discovery and its acquisition by National Museums Scotland following a successful major fundraising campaign. I’m sure people will be fascinated to have this opportunity to see it now far more clearly, to understand its importance and to gain an insight into the amazingly detailed work that we have done and are continuing to do with it. We are excited to finally be able to show The Galloway Hoard in the National Museum of Scotland and are also greatly looking forward to bringing it to Kirkcudbright in October.”

The exhibition will show how the Hoard was buried in four distinct parcels. The top layer was a parcel of silver bullion and a rare Anglo-Saxon cross, separated from a lower layer of three parts: firstly another parcel of silver bullion wrapped in leather and twice as big as the one above; secondly a cluster of four elaborately decorated silver ‘ribbon’ arm-rings bound together and concealing in their midst a small wooden box containing three items of gold; and thirdly a lidded, silver gilt vessel wrapped in layers of textile and packed full of carefully wrapped objects that appear to be have been curated like relics or heirlooms. They include beads, pendants, brooches, bracelets, an elaborate belt-set, a rock crystal jar and other curios, often strung or wrapped with silk.

The exhibition will show these cleaned, conserved objects, with AV and graphics giving behind-the-scenes insight into the archaeological and scientific details which have enabled researchers to begin to understand this unique find.

“The Galloway Hoard contains a wide range of materials, unusually so for a hoard of this period. That has meant that it has presented a wide range of conservation challenges, requiring a variety of treatments and approaches. The conservation and the research work so far have really gone hand in hand, revealing fantastic details on individual objects which have enabled us to start piecing together the story of the Hoard, and I’m pleased that the exhibition conveys a real sense of that process of discovery.”

The exhibition, which is supported by Baillie Gifford, will open at the National Museum of Scotland on 29 May 2021, and will tour thereafter to Kirkcudbright Galleries (9 Oct 2021 to 10 July 2022) and Aberdeen Art Gallery (30 July to 23 October 2022) thanks to funding from the Scottish Government.

Research meanwhile continues into the Galloway Hoard. The Arts and Humanities Research Council (AHRC) has awarded support for a £1m, three-year research project, Unwrapping the Galloway Hoard, led by National Museums Scotland in partnership with the University of Glasgow which will commence in June.

The Galloway Hoard will eventually go on long-term display at the National Museum of Scotland in Edinburgh with a significant and representative portion of it also displayed long-term at Kirkcudbright Galleries. The exhibition is accompanied by a richly illustrated new book detailing the research findings to date.

Admission to the exhibition is free but, in line with current COVID protocols, pre-booking a timeslot to visit the National Museum of Scotland is required.

In line with Scottish Government guidelines, a range of measures are in place to ensure the safety of visitors and staff. This includes pre-booked timed entry, face coverings, enhanced cleaning, sneeze screens, hand-sanitising stations and one-way routes.

National Museums Scotland has been awarded the UK-wide, industry standard “We’re Good To Go” accreditation.  This means we have been following Government and public health guidelines, have carried our Covid-19 risk assessments and have the appropriate processes in place.

3. About the National Heritage Memorial Fund

The National Heritage Memorial Fund (NHMF) was set up in 1980 to save the most outstanding parts of our national heritage, in memory of those who have given their lives for the UK www.nhmf.org.uk @NationalHeritageMemorialFund #NHMF40 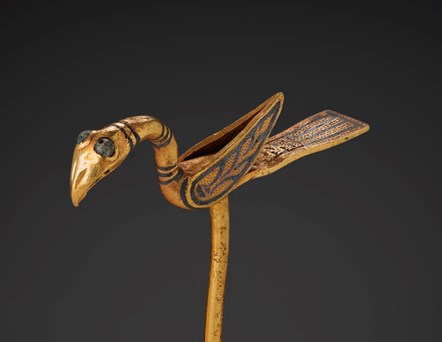