National Museums Scotland has revealed a new collection exploring contemporary Scottish whisky. Announced to coincide with World Whisky Day on 21 May 2022, a selection of bottled whiskies, packaging and related material have been acquired to reflect the thriving industry in the 21st century.

An icon of Scottish heritage and culture, whisky is the UK’s largest food and drinks export reaching 166 international markets and shaping perceptions of Scotland around the world. In recent years the industry has undergone a period of growth and reinvention, with dozens of distilleries opening for production since the turn of the century.

This important moment is reflected in a new collection of 14 objects that spans more than a decade of production. Acquisitions have been made as part of a sixth-month Student Development Fund Project in partnership with the University of Edinburgh, and represent the length and breadth of Scotland, from the Scottish Borders to the islands of the Inner Hebrides and Thurso, the most northern town on the British mainland.

“I’m delighted to add such fascinating examples of material culture associated with contemporary Scottish whisky to the national collection, from actual bottles of whisky to surprising artistic responses from local makers. These items not only provide an insight into one of our leading industries but reveal a picture of Scotland in the early 21st century that will now be preserved for generations to come.”

Today’s whisky industry exists against a backdrop of global environmental concern and demand for greater sustainability. As well as improvements in sustainable production and practice, many new distilleries are building brand identities that embrace the nature and landscape that surrounds them. A bottle acquired for the collection from Isle of Raasay Distillery is textured with fossil details from the region’s geological topography. Torabhaig Distillery’s Allt Gleann Single Malt Whisky, was named after one of the burns that provide the distillery with spring water. In Gaelic,“Allt” means stream or burn and “Gleann” a glen or a valley. The slogan “Shaped by Skye” further emphasises the narrative that the whisky has been forged by the island’s rugged landscape.

The collection also considers the relationships between distilleries and Scottish makers. A 25ml measure created by Skye-based potter Katharina Lenz for  Torabhaig Distillery highlights the ways in which the island’s creative community is stimulated and supported by the local whisky industry. On a larger scale, a backpack collaboration from Isle of Jura Distillery and accessories brand Trakke has been produced in Glasgow with materials sourced from across Scotland, including waxed cotton from Dundee that has been dyed with lichen native to Jura.

National Museums Scotland’s contemporary collecting programme collects history as it happens. Objects are acquired that reflect major shifts in Scotland during the 21st century, or change our understandings of the past, to inspire visitors now and in the future. This project will complement and expand the Museums' current collections, revealing the story of Scottish whisky in the 21st century. 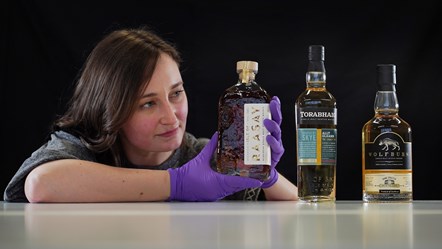 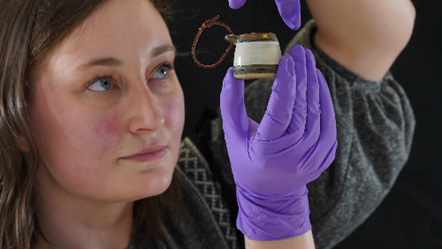