Supported by players of People’s Postcode Lottery, Make Do and Mend runs from Tuesday 19-Friday 22 April and offers a glimpse of 1940s creativity and sustainability by showing how RAF surplus items were repurposed and transformed into items such as gardening clothes, sheepskin teddy bears or even silk underwear. The four-day programme includes the chance to try French knitting and on Thursday 21 April, to learn how to print on fabric using colour made from botanicals such as leaves and berries.

Also supported by players of People’s Postcode Lottery, Dig for Victory on Sunday 8 May will show visitors how people grew and cooked their own food during the Second World War. Activities will include site tours to discover what life was like for those living and serving at RAF East Fortune. Visitors can also find out how fruit and vegetables were grown on the airfield and learn about rationing through cooking demonstrations by food historian Nichola Fletcher.

On Saturday 28 and Sunday 29 May, the 40th anniversary of the Falklands War will be marked with talks by a curator and some RAF veterans involved in the conflict. Photographs taken by a Falkland Islander and a display examining the role of the Parachute Regiment will also be on show.

The Museum’s popular Awesome Bricks LEGO® event returns on Saturday 18 and Sunday 19 June and features the chance to see amazing LEGO constructions and to try a speed-build challenge. Tickets for this event will go on sale in mid-April.

The National Museum of Flight is located on the UK’s best-preserved Second World War airfield and includes two historic wartime aircraft hangars which are packed with exciting displays telling the stories of military and civil aviation over the past century. The Museum is home to Scotland’s only Concorde aircraft and visitors can see an example of the iconic Spitfire that played such an important role in the Second World War.

The attraction houses the family-friendly Fantastic Flight gallery with its interactive exhibits where visitors can explore the science of aviation and discover how aeroplanes fly. They are also able to learn about East Fortune’s wartime heritage in the Museum’s Fortunes of War exhibition.

“The National Museum of Flight’s atmospheric East Fortune home is the UK’s best-preserved Second World War airfield and our forthcoming events programme will help visitors to step back in time and imagine the lives of those who lived here during the war.  Elsewhere on site, they will be able to explore our wonderful collections and learn about our rich aviation history and the people and aircraft involved in it. We’re proud to be one of Europe’s major aviation museums and look forward to welcoming visitors as we resume seven-day opening for the new season.”

The National Museum of Flight is open seven days a week from 1 April – 30 October from 10am until 5pm.

Tickets can be booked online at nms.ac.uk/flight 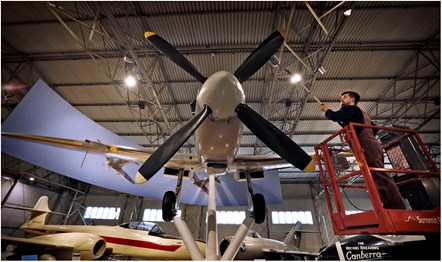