Press images of the gold filigree “aestels” can be found here and a wider selection of press images are available to download here.

The Galloway Hoard, one of the most important UK archaeological finds of the century will go on display from 30 July at Aberdeen Art Gallery, with yet more fascinating discoveries unveiled.

The exhibition in Aberdeen will feature images of three newly revealed gold filigree objects from the Hoard, which were bound together with rare silk braids. These were wrapped in a textile bundle too fragile to display and which is currently being investigated in Edinburgh as part of ongoing research into the Hoard.

New insights into the rich variety of textiles in the Galloway Hoard, material which rarely survives being buried in the ground, will also be unveiled. Researchers from the University of Glasgow have identified up to 12 different textiles in the Hoard. These recent research findings are the subject of a new interactive display created for the Aberdeen leg of the tour.

The gold filigree objects are often referred to as “aestels,” instruments which were previously thought to hold a piece of bone or wood and be used as a pointer to follow text when reading. This is the first time that a group of these gold objects have been found together and the associated textiles provide new clues to what they were used for. The presence of braided silk within the sockets on the gold objects shows that they were all connected and this new evidence casts doubt on the previous categorisation. Further research will be carried out on their true purpose and usage.

The exhibition, Galloway Hoard: Viking-age Treasure, offers the first chance to see details hidden for over a thousand years, revealed by expert conservation, painstaking cleaning and cutting-edge research. The exhibition is touring thanks to support from the Scottish Government.

“The Galloway Hoard has repeatedly drawn international attention, on its discovery and its acquisition by National Museums Scotland as well as through the fascinating discoveries made since through our programme of research. The exhibition is a fabulous opportunity to see the Hoard far more clearly than before and to gain an insight into the amazingly detailed work that we have done and are continuing to do in order that we can understand it more fully.”

“The Galloway Hoard is one of the most important collections of artefacts ever discovered in Scotland. National Museums Scotland’s exhibition tour of the Hoard is providing a unique opportunity for audiences in Scotland and visitors to view its many treasures.

“There were record numbers viewing the exhibition in Kirkcudbright and this wonderful opportunity now moves to Aberdeen. I am particularly pleased that the Scottish Government was able to provide £150,000 towards its acquisition, with a further £150,000 towards the conservation work and tour.”

“This exhibition gives local people a welcome opportunity to appreciate this fascinating treasure. The display allows us to enjoy the intricate craftsmanship and to consider the historical significance of these intriguing items. They belong to everyone so I hope that as many people as possible will visit this important example of our shared heritage. It is especially fortunate that the Book of Deer can also be seen locally just now. Together, these artefacts raise many questions about Scotland’s culture and identity right at the start of the Middle Ages. It’s important to have objects such as these on display in Aberdeen because inspecting and interpreting these kind of artefacts helps us to understand how modern Scotland came to be.”

The exhibition shows how the Hoard was buried in four distinct parcels. The top layer was a parcel of silver bullion and a rare Anglo-Saxon cross, separated from a lower layer of three parts: firstly another parcel of silver bullion wrapped in leather and twice as big as the one above; secondly a cluster of four elaborately decorated silver ‘ribbon’ arm-rings bound together and concealing in their midst a small wooden box containing three items of gold; and thirdly a lidded, silver gilt vessel wrapped in layers of textile and packed full of carefully wrapped objects that appear to be have been curated like relics or heirlooms. They include beads, pendants, brooches, bracelets and other curios, often strung or wrapped with silk.

Discovering and decoding the secrets of The Galloway Hoard is a multi-layered process. Conservation of the metal objects has revealed decorations, inscriptions and other details that were not previously visible. Research into many aspects of the Hoard continues and will take many years. Some items are too fragile to be displayed, particularly those with rare textile survivals. The exhibition will use AV and 3D reconstructions to enable visitors to understand these objects and the work that is being done with them.

Research meanwhile continues into the Galloway Hoard. The Arts and Humanities Research Council (AHRC) has awarded support for a £1m, three-year research project, Unwrapping the Galloway Hoard, led by National Museums Scotland in partnership with the University of Glasgow which commenced in June.

The exhibition in Kirkcudbright was updated in December with a digital display detailing new research into a rock crystal jar, part of the Hoard which remained in Edinburgh for study and conservation. Removal of the fragile textile wrappings revealed an inscription bearing the name ‘Hyguald,’ thought to be a Northumbrian bishop. The revelation led to national and international news coverage for the Hoard and for the exhibition in Kirkcudbright, where it attracted record-breaking visitor numbers of over 40,000.

The exhibition is accompanied by a book detailing the most up-to-date research findings and will be supported by a range of digital and learning activities and resources. 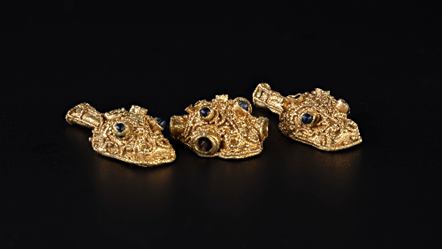 Images of the gold filigree “aestels” 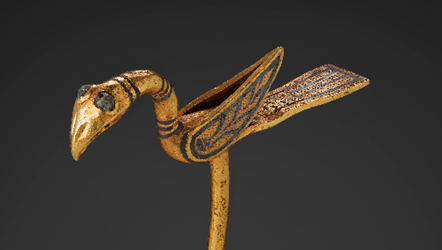