A new exhibition at the National War Museum, Legacies of Empire, examines the histories connected to objects brought back from colonial conflicts by the military forces of the British Empire.

This exhibition is about encounters and confrontations between nations and cultures in times of war. The objects featured were taken, purchased or otherwise collected by British military and naval personnel during colonial wars or garrison service across the British Empire. Today, they are preserved in national and military museum collections.

Collections made during the period of European colonial expansion from the 18th to the 20th century are controversial and widely debated today. Using the insights of military and imperial history, the exhibition investigates the contentious material legacy of the British Empire by examining how these objects were collected, and how they came to be in museums.

The taking of objects has been part of the culture of war for as long as wars have been recorded. Throughout European history, military personnel took and kept objects for gain and as a way of remembering experiences. Legacies of Empire explores how these practices were transferred to a colonial setting and how taking was done collectively by military organisations and also by individuals, according to a range of military rules, customs and motivations.

The objects featured in the exhibition exemplify the varied means by which the military collected. The exhibition includes Asante gold ornaments taken from what is now Ghana during the Third Anglo-Asante War, a silver club taken as a trophy during the Indian Uprising, a Mughal sword given to a British Army officer as a diplomatic gift, a comb acquired by a Naval officer and collector and a fragment of stone mounted on silver commemorating the death of a British General Charles Gordon in Sudan.

Legacies of Empire draws upon the findings of a major Arts and Humanities Research Council-funded project, Baggage and Belonging: Military Collections and the British Empire 1750-1900, which is helping to shed new light on collections arising from British military campaigns in Africa and India between 1750–1900, held by UK military museums. The exhibition features material from the collections of National Museums Scotland, project partner the National Army Museum and other military museums across the UK.

Dr Stuart Allan, Keeper of Scottish History and Archaeology at National Museums Scotland and co-investigator on the Baggage and Belonging research project said:

“We are committed to ensuring that the presentation of colonial and imperial histories and their legacies is based in rigorous and up-to-date knowledge. This exhibition is part of a wider research project which looks at our own and other UK military collections. We are acutely aware of the conversations and debates taking place around the topic of colonial period collections. This exhibition and the wider research project are, we believe, useful contributions to that discussion. “

Dr Henrietta Lidchi, Chief Curator of the National Museum of World Cultures at Leiden and the principal investigator leading the research project said:

“Our research aims to theorise and understand the movement and values of colonial objects during periods of conflict, and to develop new insights into the material collected as part of British colonial expansion and conflict in the 18th and 19th centuries. Deep provenance research done in collaboration allows museum collections to be understood from many perspectives which holds the key to displaying them properly and addressing their complex histories in the current day.”

British military history features widely known and well-documented instances of looting by British forces, conducted according to military regulations. The British government and its military forces assumed that property taken in war belonged to the British Crown by right. British forces used several systems to process property seized from the enemy. Its value could be divided as ‘prize money’ for sharing through an army or ship’s company according to rank.

Examples on display include gold ornaments taken as part of a forced indemnity made against the Asantehene (Asante King) Kofi Karikari in the aftermath of the Third Anglo-Asante War, Ghana, 1873-7. Gold captured in the campaign was purchased in 1874 by the jeweller Garrard, directly from the agents of the British army’s prize money system. These objects were exhibited at Garrard’s flagship store in London and then purchased from them by National Museums Scotland in 1875.

Military trophies were objects taken and kept as symbols of victory over a defeated enemy. In British and other European military cultures, the taking of trophies on the battlefield was considered to be the right of the victor.

During his travels in North Africa and Ethiopia, the Scottish explorer James Bruce of Kinnaird was given the honour of commanding Ethiopian troops in an internal conflict. Bruce took a drinking horn from the camp of Ayto Tesfos (the Governor of Samen), describing it as the most beautiful drinking horn he had happened upon. Another trophy object featured is an ornate silver club belonging to Kunwar Singh, a Rajput leader of the 1857-8 Indian Uprising in Bihar, taken by General Godfrey Pearse as Kuwar Singh was pursued and killed.

The exhibition shows, however, that some colonial objects were presented or otherwise supplied to British imperial forces in order to build and cement alliances, often in volatile circumstances.

An example of this sort of diplomatic gift is the Mughal sword presented to Colonel Sir John Macdonald by the Mughal Emperor Shah Alam II in India in 1803. Sir John Macdonald was prominent in the victory of British imperial forces in the Second Anglo-Maratha War (1803-5). An inscription records the presentation of the sword to Macdonald in the aftermath of the Battle of Laswari. This gift was tactical. The sword was one of a number of gifts made by Shah Alam II to re-establish an alliance with the British following his neutral stance in the conflict.  The sword was bequeathed to National Museums Scotland in 1944 by Macdonald’s descendants.

Military collecting was often undertaken as a direct response to personal reckonings with death and survival in battle. In consequence, many objects took on a memorial quality where ideas of service, sacrifice, respect and honour were preserved through generations of military organisations.

One example of this is a silver mounted stone fragment commemorating the death of General Charles Gordon at Khartoum, Sudan, 1885. The stone is said to come from the palace steps at Khartoum where Gordon was killed by followers of Muhammad Ahmad bin Abd Allah (‘The Mahdi’). The stone fragment was later mounted in silver and given to Queen Victoria in 1899, a gift that was noted in the Queen’s private correspondence. It is now in the collections of the Royal Engineers Museum.

Some military and naval officers used their overseas service and plentiful time off-duty to develop intellectual interests. Officers became prominent in the development of fields such as archaeology, natural science and anthropology, partly through collecting. They studied and amassed knowledge, furthering the interests and purposes of the British Empire.

Objects collected in this way include a wooden comb acquired by naval officer Rear Admiral Patrick Brodie Handyside in Ghana in the late 19th century. Handyside was appointed assistant surgeon in the Royal Navy in 1884, after graduating as a student of medicine at the University of Edinburgh. While on service in East and West Africa he collected a range of objects, including different examples of locally produced hair combs and bracelets. These types of easily portable objects were popular collectables. Handyside’s collection was donated to National Museums Scotland in 1928.

Current research being undertaken by the project is introduced in a new book: Dividing the Spoils, Perspectives on Military Collections and the British Empire, edited by Henrietta Lidchi and Stuart Allan and published by Manchester University Press.

3. National Museums Scotland is committed to revealing and sharing the full range of stories about imperial and colonial activities associated with our collections. For further information, please visit https://www.nms.ac.uk/colonialhistories 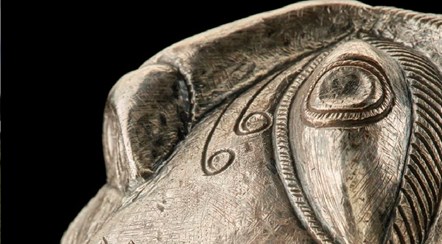