A memorial pole brought to Scotland nearly a century ago will be returned to its place of origin in what is now British Columbia, Canada.

The House of Ni'isjoohl Memorial Pole has been on display in what is now the National Museum of Scotland since 1930. During a visit from a delegation of Nisga’a representatives to Edinburgh in August, a request for its transfer to the Nisga'a Nation was made. The request was formally agreed yesterday by the Board of Trustees of National Museums Scotland and subsequently approved by the Cabinet Secretary for the Constitution, External Affairs and Culture.

“We are committed to promoting understanding and dialogue with respect to those parts of the Museum’s collection associated with our nation’s colonial history and its difficult legacies. The fact that our Trustees have agreed to this request demonstrates our readiness to act on this commitment. We are pleased to have reached this agreement and to be able to transfer the Memorial Pole to its people and to the place where its spiritual significance is most keenly understood. We hope this is not the end of the process but the next step in a fruitful and ongoing relationship with the Nisga’a.”

"In Nisga’a culture, we believe that this pole is alive with the spirit of our ancestor. After nearly one hundred years, we are finally able to bring our dear relative home to rest on Nisga’a lands. In means so much for us to have the Ni’isjoohl memorial pole returned to us, so that we can connect our family, nation and our future generations with our living history."

Ian Russell, Chair of the Board of Trustees of National Museums Scotland, said:

“The decision to transfer objects which are in our care is not to be taken lightly. Following careful consideration in line with our Procedure for Considering Requests for the Permanent Transfer of Collection Objects from Non-UK Claimants, the Board approved the request. Having subsequently sought and now received the required approval from the Scottish Government, we have informed the Nisga’a Nation and will now begin to make arrangements for the transfer of the Pole to the Nisga’a Museum.

“I welcome the decision taken by National Museums Scotland’s Board of Trustees to return the Ni’isjoohl memorial pole to its place of origin. It follows a deeply moving recent meeting with the Nisga’a delegation when they came to Scotland to explain the huge importance of the pole to their culture, people and community.

“I would like to thank National Museums Scotland’s Board for their speedy but careful consideration of the request and for reaching such a positive outcome and also the Nisga’a delegation for helping us to understand the memorial pole’s history and importance to them. It has been a pleasure to give the required ministerial consent to enable National Museums Scotland to proceed with the transfer of ownership to the Nisga’a Museum”

"Our hearts have been moved with the commitment to return our family’s cultural treasure, which enables us to create a new story to re-right a colonial wrong with the honour, dignity and solidarity of the Scottish Peoples who are walking beside us on our decolonizing journeys."

Following the decision, staff at National Museums Scotland will begin planning the complex task of safely removing the 11-metre pole from its display location and preparing it for transport to British Columbia.

The Ni'isjoohl Memorial Pole was carved from red cedar in 1855 by artist Oyea Tait and his assistant carver, Gwanes, in memorial of Ts’aawit, a Nisga'a chief of British Columbia, Canada. It shows a series of interlocking figures relating to Ts’aawit's family history through his ancestors, family crests, and his clan. The pole originally stood in front of the house of Ts’aawit's relatives in Ank’idaa village on the Nass River. Today the Nisga’a Memorial Pole is on display in the Living Lands gallery at the National Museum of Scotland. In 1929, Marius Barbeau purchased the pole from its Nisga’a owners on behalf of the Royal Museum of Scotland, which later became the National Museum of Scotland. It went on display the following year. Barbeau was an ethnographer and curator at the National Museum of Canada from 1911-1949.

The Procedure referred to above can be viewed here: 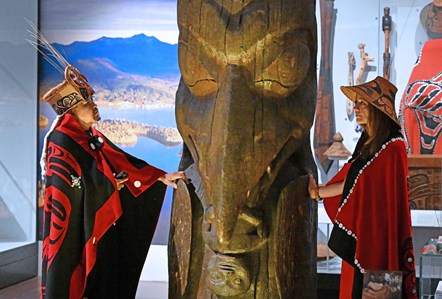